Thinking of buying a car this Spring? Ira Subaru will also be donating $50.00 for every new car sold during the month of May to Cape Ann Animal Aid’s Safe Harbor Fund, aiding in the safe transport of rescued animals to the organization’s shelter in Gloucester, MA.

Book Sale Coming! Save The Date! 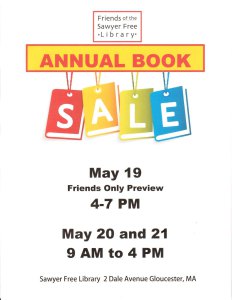 We are getting some good press coverage on 7News tonight, tomorrow and Saturday. Their What’s Cooking Segment has their reporter (Sarah French) in the Revere Ninety Nine with Charlie and Chef George. She actually goes into the kitchen with Chef George to make the Simple Seasoned Fresh Haddock. We haven’t seen the edited piece yet, but Charlie stressed the fact that it is a Gloucester product and that we have worked closely with our partners in Gloucester to bring a local product to our tables. Chef George reinforced that throughout the preparation of the dish. Should be great!

Looking forward to the segments. Here are the air dates/times for the next three days:

The International Dory Racing Committee will be holding a membership meeting this Wednesday evening, May 4th at 6:30 PM at the Dory Shop on Harbor Loop in Gloucester.  All members who would like to take an active roll in helping this tradition continue are encouraged to attend.  We will be reviewing the progress on task needed to be completed for this years events to take place.  Some of the items that we will be reviewing are Boat Prep and Launch, Fundraising, June Races and International events, computer work, mentoring new rowers, membership recruiting, etc. Even if you have only a little time to give, please join us as many hands make light work.

YOUR CAPE, YOUR PLATE – We are in the homestretch for putting these iconic plates on the road! Have you been meaning to order your Cape Ann License Plate and just haven’t gotten around to it? Now is the time to give us a call! We need your help to get the pates on the road. We have UNDER 100 to go and we can submit to the registry and put the plates into production! Order yours today by calling the Chamber at 978-283-1601 or apply online. Proceeds go back to our communities.

Best selling author, Eric Jay Dolin will discuss his most recent book, Brilliant Beacons: A History of the American Lighthouse, which traces the evolution of America’s lighthouse system, highlighting the political, military and technological battles fought to illuminate the nation’s coastlines. The talk will include remarks on the Thacher Island Fresnel lens, which can be seen in the Museum’s maritime galleries. Following the program, Dolin will be available to sign copies of his book, for sale in the Museum Shop.

This program is $15 for CAM members / $20 for non-members (includes Museum admission). Space is limited; reservations required.

For more information, email us at info@capeannmuseum.org. Tickets can be purchased by calling the Museum at 978-283-0455 x10 or online at Eventbrite.

The Gloucester Rotary Club has named Roger Armstrong and Maggie Rosa as Paul Harris Fellows, the prestigious award named after the Chicago lawyer who founded the Rotary movement in 1905. Armstrong was selected by a Club committee of previous recipients of the award, while Rosa was chosen by members of the Interact Club, the very active group of Gloucester High School junior Rotarians.  Armstrong and Rosa will be honored at a special dinner on Tuesday, May 10, at Cruiseport Gloucester, located at 6 Rowe Square in downtown Gloucester. The social hour will begin at 5:30 p.m., followed by dinner at 6:30 p.m.

Roger Armstrong was born in Danvers in 1942, and graduated from Beverly High School in 1960. Subsequent training at Northeastern University and Wentworth Institute would prepare Roger for a career in manufacturing that spanned four decades. He worked for and owned a variety of North Shore machining and engineering companies, responsible for all facets of the manufacturing process, especially quality control standards. Roger currently splits his time between Wilbur Tracy Associates as a Quality Assurance Consultant and State of the Art Gallery, which he opened in 1997 along with his significant other Sharon Pablo.

Roger is heavily involved in the life of the community, serving as President of the North Shore Arts Association, a Corporator of the Sawyer Free Library, a member of the Gloucester Committee for the Arts and the Downtown Development Commission, and a Corporator of the Institution for Savings. He is especially proud of his role as designer of the World War II Memorial on Kent Circle. He has been a member of the Gloucester Rotary Club since 2006.

Maggie Rosa was born and raised in Great Britain, and came to the United States in 1968 to work in the field of molecular biology at the University of Chicago. A short time later, she entered into the University’s graduate school program in the Department of Biophysics and Theoretical Biology. This proved to be a very important decision—she met husband to be Joe in the same program and both received PhDs in 1976. They did post-graduate research at Yale University and were later hired as scientists by Biogen, a start-up biotech company. Maggie spent 11 years with the company, and then used the proceeds from her stock options to buy a home in Gloucester.

Maggie’s community service began as a volunteer on the Schooner Adventure, and soon spread to the Gloucester Historical Commission, the Gloucester Garden Club, and the League of Women Voters of Cape Ann. Mayor John Bell asked Maggie to lead an effort to restore and preserve City Hall. She has served as Chair of the Restoration Committee ever since! Her other significant affiliation has been with the Gloucester Education Foundation, which she led as a volunteer Executive Director from 2008 to 2012 and as President from 2012 to 2015.

Tickets to the Paul Harris Distinguished Service Award Dinner are $47 per person and may be reserved by contacting event Chairman Steve Kaity at 978-879-1051. The Dinner is open to the general public, and friends and colleagues of Armstrong and Rosa are encouraged to attend.

The mission of Rotary International is to provide service to others, promote integrity, and advance world understanding, goodwill, and peace through its fellowship of business, professional, and community leaders.

This May, Backyard Growers will be very busy running events that help the community through all levels of growing–from compost to the dinner table (and hopefully back to a compost pile)! We are excited to host one Backyard Compost Workshop and three May Seasonal Cooking Workshops throughout the month.

On Saturday, May 14, we are holding our Backyard Compost Workshop from 3:00-5:00pm at the Gloucester High School Farm.

Any community members are welcome to come learn how to create a successful backyard compost pile! Turn your yard waste, garden weeds and food scraps into valuable soil amendment for your home garden. This workshop will focus on how to create a small-scale, low-effort composting system that will work for you. We will explore several different composting systems and methods,  as well as answer questions specific to your composting situation. $10 suggested donation for attendance.

For more information on this event, you can visit our page here.

After our Backyard Compost Workshop finishes, we are thrilled to be starting our new May Seasonal Cooking Workshops! This May class will be the first class in a series of three seasonal cooking workshops (May, August, and October) that Backyard Growers is launching to celebrate local seasonal produce. All workshops are held in the dining room of The Open Door. Each May course is the same curriculum.

The three May workshop dates are:

In these workshops local chefs from Short & Main and the Common Crow will teach you cooking and preparation tips. These workshops will focus on sharing delicious, healthy, seasonal-produce based, easy, kid-friendly, cheap, and fast recipes with you and your family. Beyond being practical, these workshops will be hands on, fun, and you won’t leave hungry! This is a family workshop so please bring your kids if they are 5+, remember to wear clothing you don’t mind cooking in, and please notify Backyard Growers at community@backyardgrowers.org if anyone in your party has any allergy or food concerns.

For payment information and to sign up for one of our May Seasonal Cooking Workshops, head over to our page here.

Available at the door or reserve at cast2008@prodigy.net