A spectacular day of racing for rowers and fans at Niles Beach, Gloucester

Yesterday morning, rowers of the International Dory Racing Committee took to the water to compete for the right to represent the US in the upcoming International races (June 18th @ Jodrey State Fish Pier Gloucester, MA).  But first they had to wait out the fog that kept rolling in and out off the beach.  The first heat included two new tandems to the Mixed Doubles race in Alex Pizzamenti/John Francis and Rachel Cecilio/Bill Edmonds. While both teams showed fast boat speed to the flags, a bad turn by Cecilio/Edmonds opened the door for Pizzamenti/Francis to take the lead and the victory and will move on to face the Canadians.  In the second race of the day we had new comers Malarie McGilvrey/Jaclyn Innis face off against new pairing of 2015 US Mixed Double champ Lily Jean Sanfilippo and Three time US Women’s champ Amanda Palazzola.  Both teams showed good form and steady boat speed to the flag.  McGilvrey/Innis made it out of the turning flag first and pushed it home to the finish boat for the win and right to face the Canadians.  The last heat of the day in the 1/2 mile course was the Over 50 Division featuring 2015 US Champ Alex Thomas and new comer David McWillim against multi-time US Over 40 champs John Scola/Mike Harmon.  John and Mike out lasted the former champ and partner and will move on to International competition 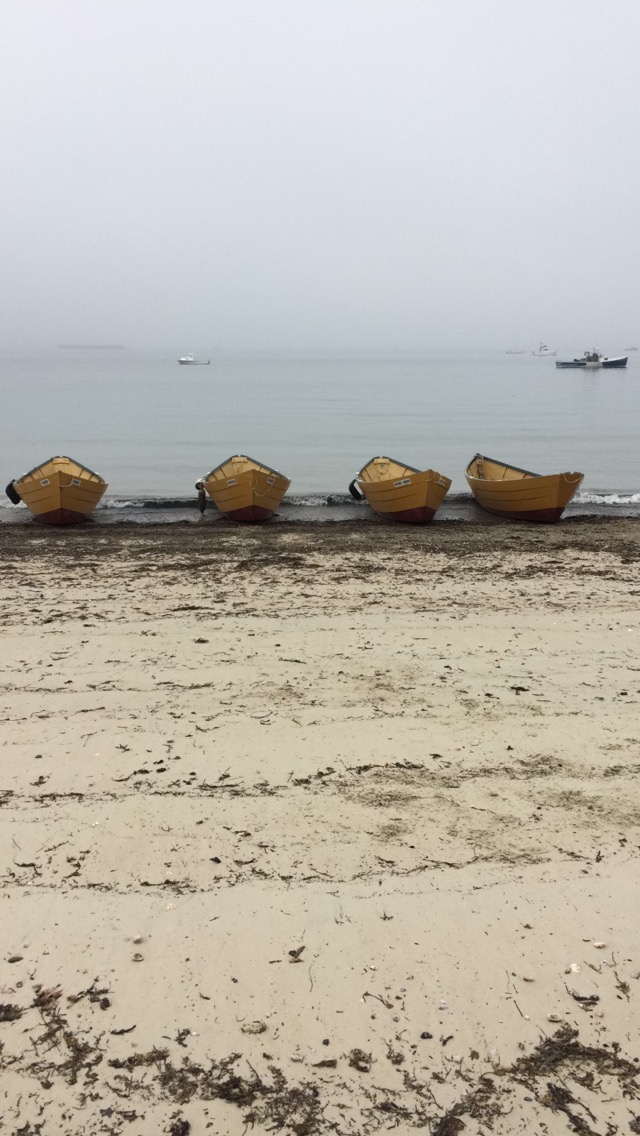 On the mile course the Men’s Open Division held 7 teams in 2 heats to narrow down the field to Monday night’s final (6 PM at Niles Beach, Gloucester, MA).  The first heat pitted multi-time International champs Jimmy Tarantino/Joe Cominelli and Joe Sanfilippo/Mark Duval facing Mark/Chris Giacalone and youngster Peter Taormina/(two racer) Mike Harmon.  With the teams jockeying at the starting line causing multiple attempts to start the race, finally the horn sounds and the race was on with the veterans Jimmy/Joe getting out to an early lead and held it the whole way to the finish with Joe/Mark and Mark/Chris battling back and forth the whole mile for second and third and with Peter/Mike rounding out the field.  In the second heat, multi-time International champs Glenn Harrington/Erik Dombrowski faced off against former US champ Vito Giacaline with brother Nick Giacalone and youngsters Sam Taormina/Vincent Tarranova.  The wind picked up just in time for the second race to start.  With a quick start Vito/Nick jumped ahead by a couple boats with Glenn/Erik and Sam/Vincent following.  All three boats pushed the pace all the way to the flags but the wind forced all boats a little off course.  Vito/Nick still held their lead at the turn and kept the lead all the way to the finish line and the win with Glenn/Erik and Sam/Vincent battling for second and third the whole way home.  With the win Vito/Nick Giacalone will face off against Jimmy T/Joe Cominelli Monday night @ 6 PM off Niles Beach.  With only seconds between the two races we look forward to a great final elimination race Monday night to crown the US Men’s Open champ.  Overall, it was a great day of racing for participants and the fans crowding the beach to route on the rowers.  Special thanks to committee support staff who make these races possible:  Joe Novello, Geno Mondello, Glenn Harrington, Billy Edmonds, Rick Medico, Janelle Dombrowski, Gus Sanfilippo, Jimmy Tarantino & Alex Thomas along with all of our loyal supporters.