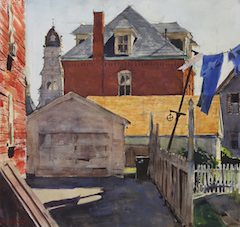 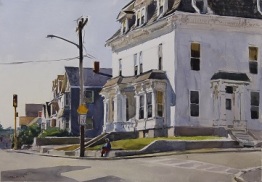 Jeff Weaver “Works on Paper” at North Shore Arts Association July 27 – August 18. Open free to the public! Gloucester artist Jeff Weaver was born in 1953 in Framingham, Massachusetts. He began drawing and painting at an early age, and by the age of fourteen he began accepting portrait commissions. In high school he was an award winning young artist, winning competitions in state-wide competitions. During this time his teacher and mentor was Eleanor Marvin, accomplished sculptor and graphic artist, who nourished his draftsmanship skills. After graduating from high school, he studied at the Boston Museum School. In 1972 he moved to Gloucester, sketching and painting the waterfront on an almost daily basis. In his early years in the city, he supported himself at various waterfront jobs, as well as from commissions for boat portraits from fishing vessel captains, and murals for commercial establishments and private homes. His commercial work spanned many years and includes over thirty murals painted in different parts of the city. Returning to fine art pursuits in the 1990’s Jeff again focused on depicting Gloucester and its environs in various media. He currently operates a studio/gallery at 16 Rogers Street on the Gloucester waterfront. Jeff Weaver can be seen frequently around Gloucester doing what he loves – painting outdoors, capturing the beauty of Gloucester. Jeff Weaver’s “Works on Paper” will be on view at North Shore Arts Association July 27 through August 18. The NSAA is open free to the public Monday through Saturday 10am-5pm and Sunday noon-5pm. North Shore Arts Association, 11 Pirates Lane, Gloucester, MA 978-283-1857 http://www.nsarts.og